In addition to Thomas’ writing for stage and screen, and Thomas and Philippa’s collaboration for BBC Radio 4’s Weekending comedy sketch show:

Philippa’s new book Talking Speaking, the guide to public speaking for business, performance and social occasions will be available soon

Studio 1919 have taken three shows to the Edinburgh Festival, to superb reviews and full houses

The adventures of Mistress Fanny Hill on a journey through the madams and tarts, sailors and gentlemen of the dark side of Georgian London

What the press say about Fanny Hill

“… a hugely enjoyable bawdy romp . It’s deliciously naughty and well worth staying up for…!

… Actress Philippa Hammond is instantly likeable as the much-sought-after Fanny, and brings an unexpected grace and vulnerability to the character…

… it’s very rude, often funny, but without ever descending into bad taste. Fringe drama doesn’t come any more stimulating than this…” 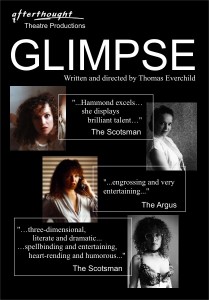 Comedy, tragedy and mystery – a quartet of one-act plays / monologues for women written by Thomas Everchild and originally performed by Philippa Hammond

The plays glimpse the lives of four characters from different points in history:

Vintage naughty romantic comedy-drama – Edwardian England: an unusual twist to a story set in the early days of cinema as a lady looks back on her life making naughty ‘what the butler saw’ films with her beloved

Glimpse has an excellent track record and reviews, and may be available for performance, for amateur or professional production

Glimpse consists of four separate one woman pieces, each 25 minutes, which can be performed as a quartet or as individual plays or together in any combination

The plays were originally performed as a single 120 minute show (including interval) by Philippa Hammond, but they have since been performed together by different performers and as individual 25 minute plays

What the press say about Glimpse

“… a hit from the Edinburgh Fringe festival …

… Hammond expertly places her audience in the scene, deftly moving across centuries and cultures as she embodies the mind and motivations of four women…”

… brilliant talent … an hour was all too short….”

… sense of command in script and acting. Hammond excels …

… the writing is taut, wry and understated. At best reminiscent of Alan Bennet’s Talking Heads, Glimpse is impressive, and well-named; fleeting moments of subtle theatrical insight…”

Edwardian England: A lady looks back on her life making naughty ‘what the butler saw’ films with her beloved Herbert

King Arthur comedy short: What would have happened if Merlin had invented silent movies?

Short drama: Medusa is alive and well and living in Brighton, and has the chance to rid herself of her terrible powers forever

Feature: Philippa plays Ivorwen, an ancestor of Aragorn, in this Lord Of The Rings-inspired film from Actors At Work Productions

Science fiction short: An endless party aboard an airship adrift in the mist

Short drama: A writer battles deadlines as her stories threaten to take over

3D graphics for this art installation at the Hague

The Hunt for Gollum

The Powell and Pressburger Appreciation Society

Formerly believed lost, this re-discovered one-minute silent gem is an important record from a time when very little film survives, and is one of the few known moving picture images of the greatest star of the Victorian stage

Studio 1919 are in pre-production with a proposed documentary on the life and work of Dan Leno, produced and directed by Thomas Everchild